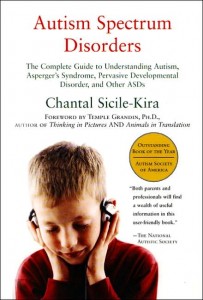 Autism is a neural disorder that is characterized by impaired social skills and communication. It is a part of a broader condition Autism Spectrum Disorder (ASD) which also includes Asperger Syndrome and Pervasive Developmental Disorder (PDD-NOS).

The U.S. Centers for Disease Control and Prevention estimates that 1 in 110 children born today is autistic.

In August 2011, Time magazine ran two interesting stories on new findings regarding Autism. One story “For Siblings of Autistic Kids, Risk Is Far Higher Than Thought“ by Bonnie Rochman covered a study conducted by University of California, Davis (UCD) Mind Institute investigated the risk of an infant with an older sibling with Autism. Researcher Sally Ozonoff found that among 664 children that were monitored in the U.S. and Canada the risk of the disorder was approximately 19 percent, significantly higher than previous beliefs of 3-10 percent.

The study addresses the questions many parents of autistic children have “What is the risk of my younger child being autistic?“. However, these findings should not scare parents but to make them more aware. It also highlights the importance of closely monitoring younger siblings of autistic children for early signs of autism.

The other article “Autism’s Lone Wolf” by Judith Warner covered interesting findings in a study by Simon Baron-Cohen et al., one of the founders in the field and director of the Autism Research Center at the University of Cambridge. Baron-Cohen and team hypothesized that an area that included large number of “systemizers” (people who tend to focus on controlling and building systems and how they work) might lead to a higher prevalence of Autism Spectrum Conditions (ASC) in their children. This stems from Baron-Cohen’s idea that systamizing, deficits in empathy or the capacity to experience feelings being experienced by another person, existed in Autistic people and with a lesser degree in many of their relatives. His theory was that this brain type would be common in a population that included large clusters of people with very strong science, tech or math skills.

The team investigated if ASC was more common in the (Information Technology) IT region of Eindhoven in the Netherlands than in other areas (Haarlem and Utrecht) of similar size and socioeconomic profiles that do not include similar numbers of IT companies or workers. Eindhoven includes many high end IT facilities including Eindhoven University of Technology, High Tech Campus Eindhoven which includes companies like Phillips, ASML and IBM.

Diagnostic information on  62,505 children was investigated. As the team predicted ASC seemed significanlty more prevalent in the Eindhoven region (229 per 10,000) compared to findings in Utrecht (57 per 10,00) and Haarelm (84 per 10,000). The study cautions that more follow-up research is needed to rule out factors like the possibility of increased awareness about autism in Eindhoven. Accorrding to the article “Baron-Cohen also warns strongly against drawing simple conclusions about who should or shouldn’t marry whom”.

These findings are a major step in helping us understand more about autism and it’s causes.

Below is a list from Early Signs Inc. on red flags of Autism Spectrum Disorder to watch out for in your baby.

More information on early signs and symptoms is available at the Centers for Disease Control and Prevention and Autism Speaks Early Signs page.

“Was the recipient of the 2005 Autism Society of America’s Outstanding Literary Book of the Year Award. A supportive and personal book that includes a detailed resource section. Practical and informative, straightforward and easy to read, the facts are illustrated throughout with quotes from people who have autism, and stories of parents’ experiences and professionals’ opinions. Geared towards the general public as well as parents and professionals, Autism Spectrum Disorders has been acclaimed as a highly accessible book by experts in the field and has become “the” handbook on autism.”
The Boy Who Would Be a Helicopter by Vivian Paley

” Focuses on the challenge posed by the isolated child to teachers and classmates alike in the unique community of the classroom. It is the dramatic story of Jason-the loner and outsider-and of his ultimate triumph and homecoming into the society of his classmates. As we follow Jason’s struggle, we see that the classroom is indeed the crucible within which the young discover themselves and learn to confront new problems in their daily experience.”